Breakin it Down in Lousiana 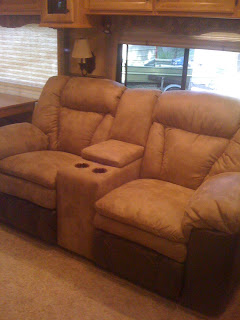 I have no excuse for not updating the blog lately, except since our Easter campout in East Tx, Nothing Happened! Maybe not that slow, but pretty quiet. Work has once again interfered with our RVing but we have managed to get a few projects done. Peggy and I have been talking about replacing the "most uncomfortable sleeper bed ever made" with a Loveseat Recliner combo. We spent a couple of Saturdays looking at every furniture store in our area and finally settled on one we liked. A few more days spent getting the old sleeper took apart and moved out then we were ready. While looking for the perfect combo, Peggy mentioned that our living room suite was getting pretty dated, and we have hated it since about a week after buying it six years ago, so we were looking around and Peggy found the suite that she really liked, so why the heck not! Of course it being Mothers Day weekend, there aint no way I am gonna be a naysayer on Mothers Day weekend! So on Tuesday evening, the truck rolls up with the whole load just for us! 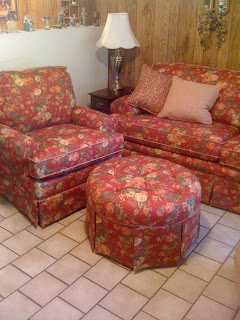 The young men making the delivery worked really quick to get the living room furniture in the house and all was going well until I explained that the Love Seat Combo went out to the RV. They drove around back and stood looking at the door of the Rolling Condo and back at the Sofa Combo. I explained that we had some friends who had just purchased the same brand of recliners and knew that they would fit if they took the set apart. They both dug in and removed the frame  holding the whole shebang together and moved them inside and put it all back together. Both explained that they had never put one of those in an RV. When they finished I showed them how the slide mechanism worked and they were very impressed. Of course I did not even think about new curtains, rods, wall stuff, lamps, tables etc...but Peggy is working on that front and will get that in order shortly but first, I had a mini vacation planned for the next weekend so the rest has to wait awhile.

I had planned to take a trip back to the Breaux Bridge area of Louisiana and do some site seeing, so we blasted off on Thursday for four day weekend trip to Poche's Fish N Camp just outside of Breaux Bridge. We left home about 11:30am and moseyed on that way for a 248 mile journey to the RV Park. On the way, I stopped just across the Louisiana border across the Sabine River, and stretched my legs at the visitor center. While there, I spotted this great RV find. Can get it for a song! It is a bit of a fixer upper but nothing we couldn't handle. I think I could get the State of Louisiana to pay me to move it. There is a sticker on the back noting that it has been in this same spot since April 24, or so. Gee I wonder how long they will leave it before dragging it off. I didn't peak through the windows, cause I was afraid something might be dead inside. Perhaps the state is gonna shove it off in a Bayou somewhere for the fish to use as habitat! 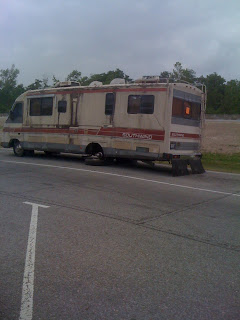 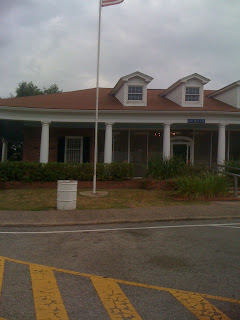 The staff at the Welcome center was giving away Coffee, Maps, Cookies, heck I could have just dropped the trailer in the parking lot and set up camp, but we had places to go and people to see, so we didn't dawdle long. Finally pulled in to Poche's about five thirty and got set up well before dark and waited for our friends to come in an camp near us from Port Arthur Tx. Here is the 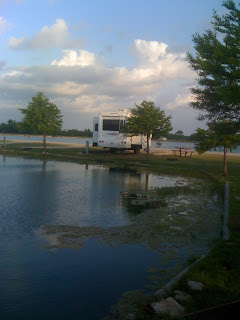 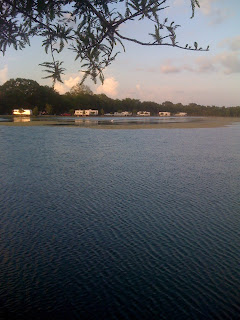 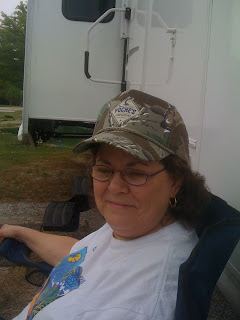 most relaxing  view of our campsite. Of course the folks flooded in on Friday and it was pretty crowded for the weekend. The best part was the site was free!!! Man can I make a deal with anyone. Of course I did pay hundred bucks for that cap that Peggy is trying on! Peggy was in a real good humor for this pic. It did not last. We left out Friday morning to pick up some staples at WalMart and buy a tank of diesel to do some exploring later. I stopped at the pumps and while pumping I noticed something running out from under the truck. I stooped down and sure enough, a pretty good stream running down from above. I popped the hood and noticed something wet and slick splattered everywhere. I thought that I had a bad power steering hose leak, and could feel the stuff was slick. But my co-pilot casually mentioned that it did not look like power steering fluid (but being a girl, how could she know that stuff!!!) Arggggg!  We called our friends back at Poche's and located an auto repair shop real close to us. They picked us up and we went to talk to the owner. I told him that I thought it was the power steering hose, so he got on the phone  and found that there was not one anywhere near where we were and it would be Monday before it could be fixed. He sent his wrecker driver to pick up the truck and went on back to camp. Happy at least that we had not broken down on Interstate 10, and had somewhere to stay while waiting on the part. The next few days were spent hanging out, eating, and hanging out some more and goin out with friends to eat and come back and hang out some more. Not our plan when we left home, but under the circumstances not a lot we could do. Monday morning rolled around and my friends took us back to the shop to see if things were happening. The owner then told me that I had a bad water pump, not a power steering line and he was working on it at this time and would be through with it in about an hour and a half. I was happy and ready to get loaded up but of course I had to endure a little ribbing about the damage being a water pump and not a power steering hose. Hey! I ain't no mechanic! I did tell the guy I was not sure what it was and that it was a guess on my part. All got a good laugh at my expense but the truck got fixed. We did not get away till 1:30pm and spent the rest of the day driving thru heat and some thunder storms to get home about 7:30pm. On top of all that, I have to take the Rolling Condo to get the same water leak that happened in the flushing system repaired At least I think that is where it is, but I ain't no Mechanic!!! Ask anyone! Safe travels to everyone and take care.
Posted by Charlie and Peggy at 7:59 PM 7 comments: