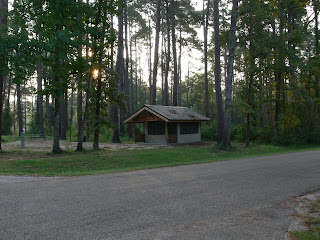 Thursday night, Peggy and I did the grocery shopping and packed up the Condo for a short drive to one of our local campgrounds located on Sam Rayburn Lake. We had been wanting to camp out their since Hurricane Rita had taken down some trees and made a mess a few years ago. The Corps of Engineers has been working since that time to revamp the campground and it really looks nice. They have added these little screen houses for those folks who don't really want to sleep in a tent. They are a small room with concrete floors, a counter top with storage underneath, and electricity. They have also added floating boat docks at the launching ramps and a pavilion with five or so RV pads that are in a semi circle of the pavilion. Pretty neat, for a family reunion. We rolled in on Fri 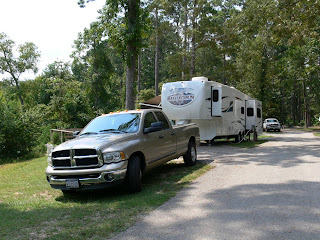 day just about lunch time and met the nicest couple who are workamping for the Corps. I did not get their names, but they were very easy to work with and moved us to a better spot with a good view of the lake. After some careful work by Peggy with the our handheld radios, she had me in just the right spot, and we dropped the jacks and hooked up. I thought we were a little close to the road but we were on the campsite. With the slides out and sitting in the slide out next to the road, a vehicle coming down the road looked like it was coming right toward my chair! I finally just shut that window shade and tried not to look. The park host also told us that there was an ant problem at the park and that we should put out ant powder or granules, and to put it on our tires, jacks, water lines, elect chord or anything else that would touch the ground to keep them out. As soon as we got hooked up, we drove a few miles back to a store and got a couple of cans of ant poison and gave them a dose on our return. No problems with ants the whole time we were there. 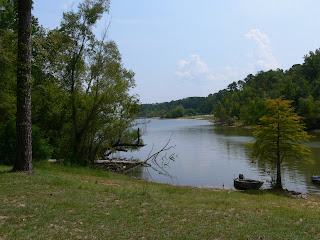 This is the view from my coffee cup every morning. You just cant beat that with a stick. It was relatively quiet for a labor day weekend. We had good Sat reception so I could watch the
Red Sox play ball and the Nascar race on Sunday. We also had some good neighbors who, even though they had a big dog and a small boy, it was not bad at all. I had planned on doin some fishing from the bank by our campsite and was all set to get the fishin equipment in gear when Peggy spied a water moccasin slowly swimming right next to the camp. That rascal was about 4ft long and big around as my fist, so that wrapped up the possibility that we would be taking our chairs down by the water and watching our cork bob up and down. If we had seen one on the shore, we would have had to move for sure. 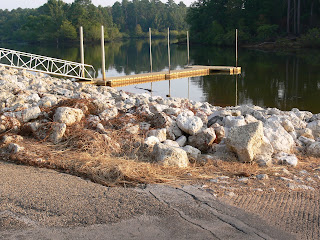 We did see something new for me. A Parks and Wildlife Game Warden workin the water on a Wave Runner with a Blue Lite mounted on the front forks. I don't know if they use that to chase down the kids riding them to fast or dangerous, or just for fun. Either way, it looks like they would get wet while doin this and I guess they don't mind as hot as it is. 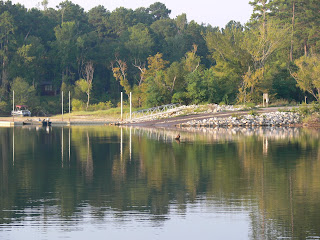 We did have a thunderstorm blow up one evening, but it went around us. I did notice a lot of swimmers still in the water with lightning being visible and thunder rumbling. Not sure what people are thinking or maybe there not, but we were anxious until they all got out of the water. Only one major malfunction to report on the Rolling Condo. The convection/microwave oven decided to quit workin on Sunday morning at breakfast. Hate that when it happens, but since the warranty is still good, we will contact the maker and see what the process is for replacing the oven and start over. Luckily Peggy remembers how to cook bacon the old fashioned way on the stove top with a skillet!!!! Until next month, everyone stay safe and travel when you can.
Charlie

Posted by Charlie and Peggy at 5:08 PM 2 comments: