Rallyin with other Heartland Owners

I am sitting, waiting quietly for children to come to the door for Halloween! I made a special trip to get candy in case we have visitors. Even though Peggy says we have never had any before, this year may be a first, now that some kids have moved close to us. I always prepare for the kids and if they don't show this year like before. I will just eat the candy!
Okay, I have no excuse really on not posting after our return from Rayfords Crossing and the Heartland owners rally. I have had work stacked up waiting on me and finally managed to catch up. There are no photos of this trip save for one taken at the potlock supper on Saturday nite, but it has the backs of peoples head mostly so I opted not to put it in the blog. I also have no excuse for not taking any pics so there you are. We did arrive and get set up okay on Wed evening. Everyone allready camped came by and welcomed us and invited us down to the gathering camp for the get aquainted sit around. We then met the rally organizer who told me that they did not have a lot planned since a couple of sponsers who usually present informative talks, backed out. No worries for me since I prefer to wander at will and shoot the bull. My navigator got sick on the first night with a bad chest cold and managed to remain unconcious for most of the rally. I did come and check on her hourly and see that she was fed and watered, but after that she was down for the count. I did learn a lot from the other RV folks there, and that was the main reason I had wanted to go. Look at other rigs, talk about issues, soak up knowledge that someone else has learned the hard way, and try to learn more about our RV and how to make it all work. I looked closely at every kind of hitch, stabilizer setups, wheel chocks, sewer hoses, jacks, flags, decorations you name it! In that respect it was very helpful to me and I asked lots of questions. I can't say enough about the welcome we received and the fellowship extended by all we met. The only negative thing I have to say about the whole rally,,,,was having to leave a bunch of really nice folks and go home to the JOB. One day, we won't have to leave if we are not ready and can linger for as long as we like. I am really looking forward to that day! We have made some new friends and contacts and hope to get to do some more Rallyin in the future. I have a set of Air Bags on order to help me level the truck out some and a few suggestions for improvements to my setup. Everyone stay safe and have a great Halloween.
Charlie
Posted by Charlie and Peggy at 5:13 PM 1 comment:

So yesterday the new mudflaps came in and Peggy and I put them on the truck. Since we have had so much rain, everything is muddy and nasty but it had to be done. I posted the pic of the flap and the clean RollingCondo so everyone could see the genuine Duraflap brand made in Grants Pass, Oregon. Of course I wanted the naked lady design common on 18 wheel trucks, but for some reason, Peggy said "not". I did manage to look a little East Tx redneck with the Tx logo and the Ram design! It fits right in with the Bighorn RV and advertise our state a little (like no one would know where we were from by hearing us talk and spotting the license plate! Taking photos of a metal shiny mud flap is harder than it looks. I am gonna post those pics below, showing my earlier attempts!! 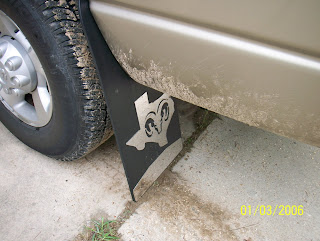 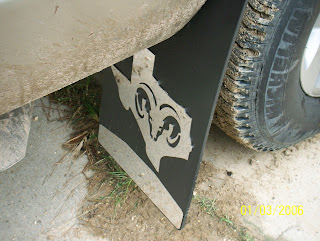 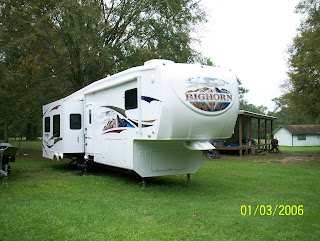 See, this photo taking thing is harder than it looks! The reflection from the trees across the road give a camoflage effect. My reflection in my PJ's, white T and Bald Head, really set it off !
I should quit while I am ahead I think. and go back to watching the Cowboys play football.
Posted by Charlie and Peggy at 10:37 AM 1 comment:

This month, we will be making our first ever RV Rally. This is where folks gather up at a pre determined site and, well they Rally! I have read a lot of folks blog that they are either headed to or have gone to a Rally so I guess its something RV'rs do. My wife asked me what happens at a Rally, and I told her I had no idea but we will know after the Heartland Rally near Spring Tx on October 15th thru thru 18th. Since we are fixin to go Rallyin we had a few things to get done on the Rolling Condo. Our microwave/convection oven quit on us at our last campout and had to be taken in to the dealer for repair. While waiting on the unit to come back from the factory we decided to get a good surge protector installed in the Condo. This will shut the rig down if you get too much electricity or not enough ,and possible prevent damage to your electrical components.  Of course we needed to get the trailer cleaned up and washed. We have been putting this off so on Friday evening we started with the roof. With some Spic and Span and push broom and water hose, we got after it and made good progress with the top, back, big slide side and the front cap before we just gave out. Looked good ,so we continued the next morning after breakfast. Now we were not moving as fast on Sat morning because for some reason, we both hurt nearly everywhere we could touch. Not being used to  manual labor for a long time, our muscles were screaming in pain. After getting our IBuprofen for the morning down, we got back on it and washed the remaining side and tackeled the awning. The awning proved to be the hardest job of all. I could only reach halfway up from my ladder and it had to be scrubbed on the top and undersides. Some mildew was present which had to be delt with with a different solution than I was washing with but finally we got the job done. I had complained when we were on vacation at paying 80 bucks for a wash at a big rig truck wash next to the interstate somewhere in Arkansas, but on reflection, it was worth every dime of it!!
I would have included a photo at some point in this blog, but I cant hold a camera up that high right now! I cant seem to pick my arms up above my waist without feeling that burning in my shoulders, so just visualize it for me. The Rolling Condo is gleaming clean and ready for Rallyin! While examining some small dings on the front of the trailer near the front jacks, I believe that some small rocks have kicked up and marked it. For the year that we have had the new trailer we have not given a thought that stuff will kick up and make a mess on that part of the trailer. One of the most basic parts of a truck is mudflaps and we dont have any. So Peggy and I got on the computer and in short order got a pair ordered that we can install which should be here next week.
On another note I have to send out congrats to my dad on his 80th birthday! Not only did he reach this milestone in life, he graduated college at the same time. Most would not continue to pursue a degree that you had been working on most of the last 40 years, but my dad only liked a math course to get graduated and he finally got it done. We are all proud of him as he put his education goals aside many times so that his six kids could get an education and anything else they needed in life, while working two or three jobs at a time. When he found out how long it would take to wait for the actual graduation ceremony, he decided to skip that part because in his words " I might not last that long" ! He is still wagging it around and making folks wash their hands in order to hold it. I washed mine in order to get a look at it and not leave any fingerprints on it.  I will let you know how the Rallyin goes, Hopefully I can pick up some tips from more exprienced RV'ers that will save me some heartache or trouble ahead. That's from the school of hard knocks and an education that you cant get in college! Be safe and Take care.
Charlie
Posted by Charlie and Peggy at 4:50 PM 3 comments: