We could not resist going on a campout when the weather was supposed to be good all weekend. We took off on Friday morning and made it all of twenty miles before Peggy smelled something burning coming thru the air vents. As soon as I could safely stop, we got out and quickly found that smoke was coming from the right front wheel area. I lifted the hood and could not see any fire and the smoke soon quit. Hmmm! New Brake Pad were put on the truck a week or so ago, perhaps that was an issue. Finally figured out that a Brake Caliper had stuck and gotten hot. I decided to press on and have it checked on Saturday at the nearest Tire shop. As soon as we got to camp and unhooked the 5fer, Peggy starts sweeping the site! I managed to capture her doing a little work to make the place livable. The squirrels like the concrete table also, but do not clean up after themselves. This campground stays pretty busy most of the year, but in the fall you can almost get the place to yourselves. There were only three or four campers in the whole park, so we had plenty of space and it was very quiet and nice. 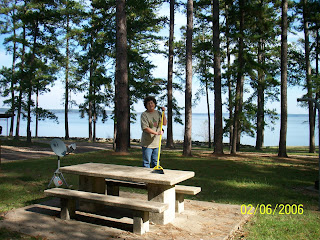 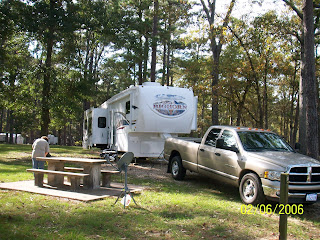 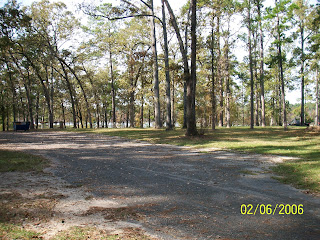 As you can see by the pics,,,not much going on here and we really enjoyed it. On Saturday we took the truck into Jasper Tx to a tire store and they took the wheel off and diagnosed the caliper was the problem and suggested replacing it. We spent the next hour or so watching traffic and reading the magazines on tires in the store. I did catch Peggy filching a recipe from a very old Southern Living magazine but she says that women do this all over the world and if I wanted to eat her cooking, I should turn a blind eye to her theivery. I did what any good law enforcement officer/husband would do, and I didnt see nuthin!! 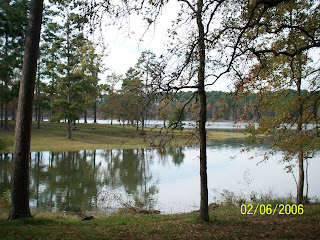 If you click on this pic, Peggy caught a squirrel working on the peanuts that I threw out. We had 5 or 6 near the camp scrounging, eating, and burying peanuts for the winter. 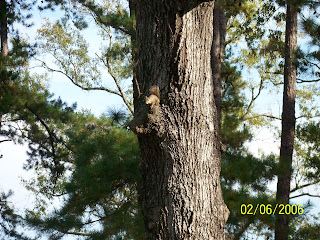 If you need proof that computer games makes people crazy look no further. Here is Peggy checking her facebook page and farming sites. I could tell you that she is using two laptops to do this, but truthfully I was right next to her sitting in the cold to check 'the farms' We purchased the wifi from the park but were not close enough for a good signal and had to walk a hundred yards or so to get a good signal. We did get a lot of looks from boaters leaving the boat ramp and headed to camp fires and lights while we sat in the dark by the glow of the computer screens. How Cozy!! On Saturday Keith and Donna Green came by while out looking at Real Estate in the area. I did not get a pic because they dont stay anywhere long and had to get on the road. 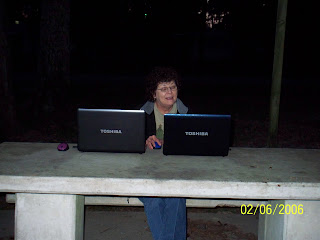 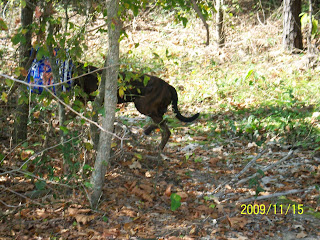 I had posted the below pic of a bulldog caught in a beer box on Facebook. Peggy took these after I backed the 5fer in the usual space in our back yard, so I posted these for anyone to look at. 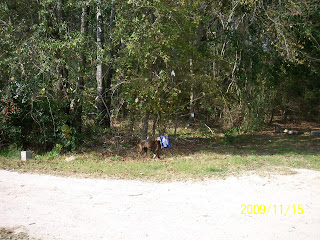 I hope everyone enjoys the Thanksgiving Holidays and try not to eat too much! I gotta get out the map and plan another trip.
Posted by Charlie and Peggy at 12:55 PM 2 comments: